A rebellious peacock, a distracted osprey and a clueless horse: The Writing a Fable workshop at Lifestyles for the Disabled led to the creation of some memorable and charming characters, entertaining stories and thoughtful words to live by.

With experience working independently, the College Group members wrote their own fables with discussion and feedback from each other and guidance from staff. Their output added many fun and thoughtful pieces to the Lifestyles Foxy Fables collection. The stories can be found in two separate posts at “The Cat and The Horse: Lifestyles Foxy Fables” and at “Writing a Fable: All Happenin’ at the Zoo.”

The Media and Arts groups’ need for a meeting place led to the discovery that Conference House Park has a fledgling writer’s center at the Rutan-Becket House, one of three historic homes at the park. With the welcome of Director John Kilcullen and his staff, the groups made themselves at home in the house and on the grounds.

Both locations, the Zoo and the historic home, helped inspire detailed settings, some lovable characters and observant artwork.

LISTEN AND IMPROVISE
Writing a story as a group may sound unusual, but that is what both the Media and Arts groups did. By listening to each other and improvising when the story went in an unexpected direction,  some unique stories and characters were created. Here is one by the Media Department about a smart-aleck dog and level-headed pig.

The Dog and the Pig Fable

The Arts Group also met at the Rutan-Becket House and began the workshop by illustrating “The Dog and The Pig” fable. Here are a couple of those illustrations.

A whimsical one by Janiece Hinds.

And a more abstract one by Michael Diel.

1950s MAKEOVER
Rutan-Becket House was built in 1848, but the interior had a 1950s makeover. The Arts group incorporated details such as the fireplace and comfy chairs and the dining room with a rotary phone into their story in their fable “The Bear and The Horse.”

THE BEAR AND THE HORSE

Accompanied by their staff, artist Eve LeBer and Jacob Samuel, the group enjoyed the setting indoors and out. 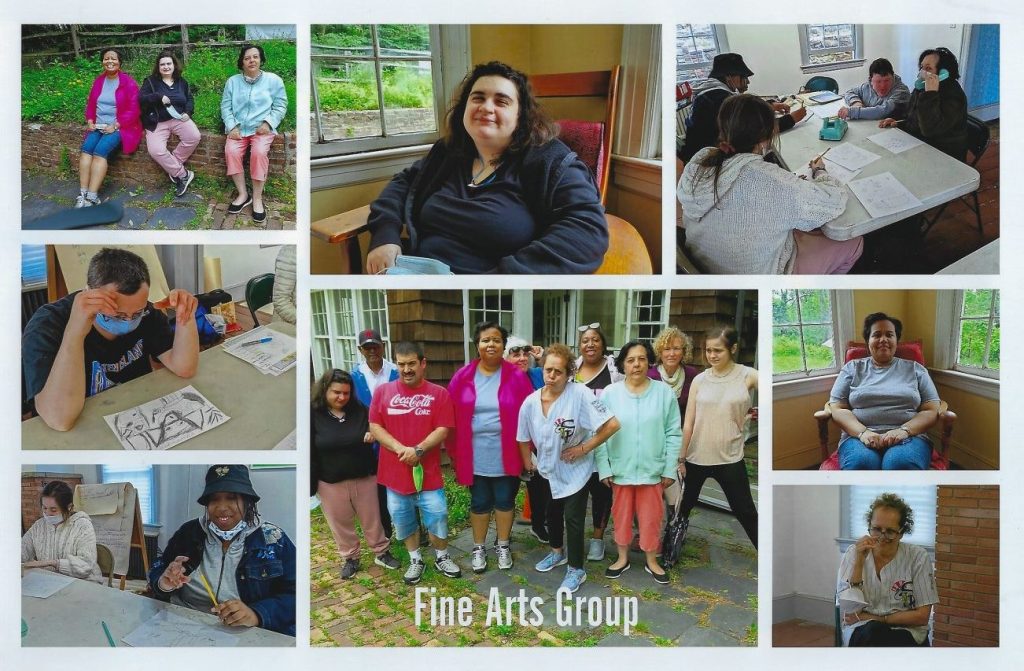 The Rutan-Becket House overlooks the meeting of the Arthur Kill with the Raritan Bay. The workshop took place in early spring and those bodies of water separating us from the New Jersey shoreline were visible through the just leafing trees. Fishing boats, pleasure boats and tankers glided by. Osprey, large birds known as sea eagles, gathered sticks. And migrating birds could be heard calling. The screen-less windows were open for an almost ever-present breeze. Flowers and trees were blooming. So in addition to their literary endeavors, the Media Group, including Department Manager Eddy Gregory, staff Anthony DeSimone, and driver Ernie Riggio, enjoyed the relaxing atmosphere of the waterside retreat. 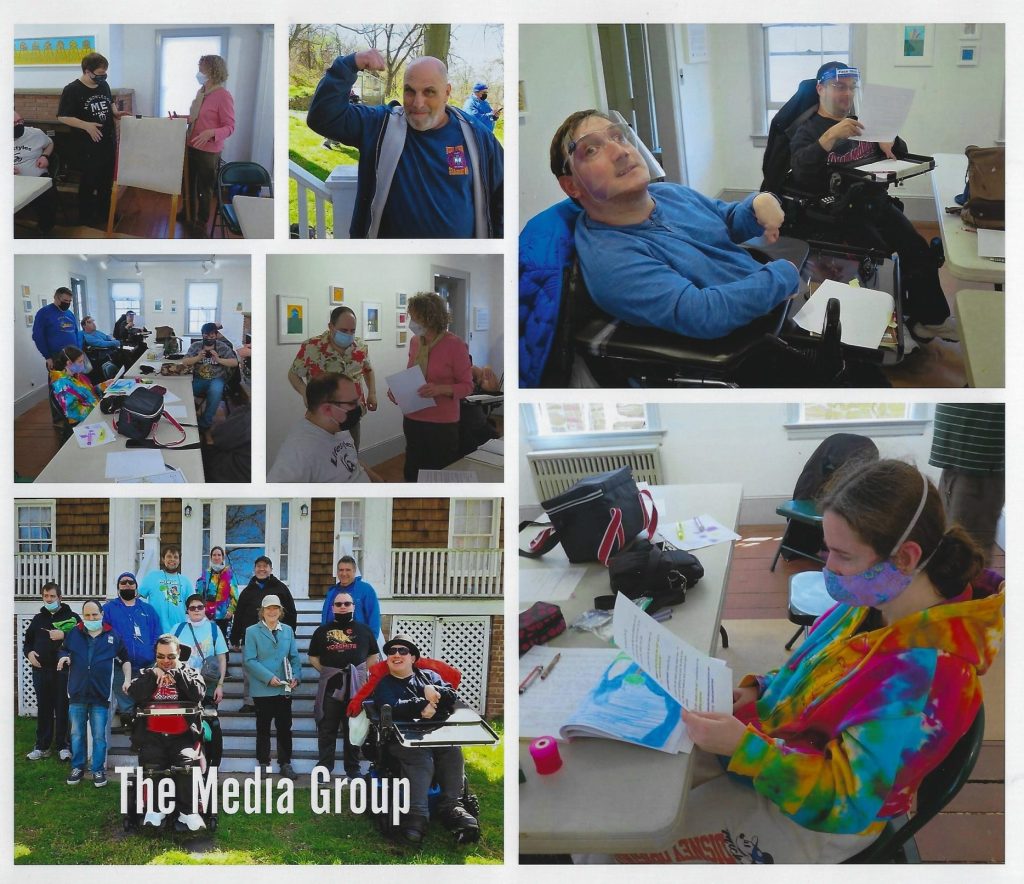 The group’s love of good food inspired a fable with meatballs and things going awry in the kitchen. Writing the moral sparked discussions from how to put out a kitchen fire to being patient with a friend causing chaos.

The Osprey and The Woodchuck


ONE THING LEADS TO ANOTHER
The Rutan-Becket House provided many other opportunities. It is included in the Heritage Trails of Conference House Park and features the Tottenville Historical Society’s upstairs exhibit Still Waters: Reflections of a Maritime Community. The park setting also provided the chance to celebrate Arbor Day by planting a white pine tree with Kilcullen and his staff. Plus, writer-in-residence Stella Fiore read a poem.

Finally in this story of how one thing leads to another, something else wonderful happened. Earlier this year artist Lisa Dahl had helped establish the gallery/meeting space where we worked and her show “Rooted in Place” was hanging. Seeing an opportunity, Media Department Manager Eddy Gregory and staff Anthony DeSimone got the green light for mounting the next exhibit, DeSimone curated “Nature Seen — Through Our Lens,” from the many nature photos taken by participants in the Media program.

IN CONCLUSION
The idea for writing fables together is inspired by Marie Ponsot, a poet and teacher, who developed the exercise in “Beat Not the Poor Desk,” her book on teaching writing. The workshop was facilitated by Kathryn Carse with a grant from Staten Island Arts.

Remember, for more fables, check out  “The Cat and The Horse: Lifestyles Foxy Fables”
and “Writing a Fable: All Happenin at the Zoo.”

This project is made possible by a DCA Premier Grant from Staten Island Arts, with public funding from the New York City Department of Cultural Affairs.