So, I am getting a new chair, but I want to talk to you about my friend Freddy, that’s my old chair. Excuse me if I get a little emotional because Freddy means a lot to me. Freddy was my friend.
When I had to say goodbye to Freddy for the very last time, I was very sad. That day my father was with me and I wanted to cry on his shoulder because I couldn’t believe that that was the last time I was going to see Freddy ever again.
I was sad because I could no longer sit inside Freddy.

People sometimes dismiss these feelings – my emotional attachment to my chair — but Freddy was alive to me. I gave Freddy a voice.
Before Freddy, I had a manual chair. This current chair is named Viper. Viper has a lot of markings because I am a restless driver. But these are my markings. Viper is a warrior.
Viper will go to Jersey for my backup chair. My new chair is named Amanda. Amanda is blue and bigger, feisty and quicker, but I don’t know much more about Amanda yet.
What I want people to really believe is that all my chairs mean a lot to me. To some of you, I know this is silly, but this is coming straight from the heart. If you have something that is your friend, cherish it.
– Joseph Padalino with Kathryn Carse
Photos by Dolores Palermo for Life-Wire News Service. 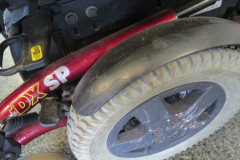 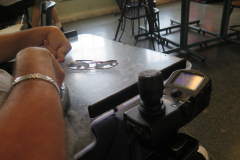 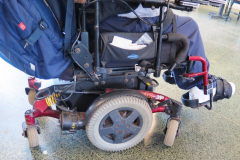 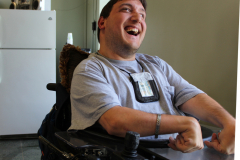 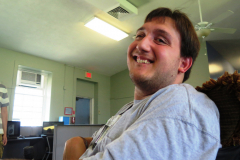